Dropkick Murphys have announced a new album unlike anything they’ve done to date, bringing Woody Guthrie’s words to life on This Machine Still Kills Fascists, to be released digitally and on CD on September 30th via the band’s Dummy Luck Music / [PIAS], with a special edition vinyl out in November. The first single and video, ‘Two 6’s Upside Down’, will debut on July 6th. Pre-save the track here and pre-order the album here.

In the ten songs that make up This Machine Still Kills Fascists, Dropkick Murphys bring Woody Guthrie’s perennial jabs at life – many of which are from the 1940s and ‘50s – into the present, with the resulting music eerily relevant to today’s world. And they’ve done it all without their usual arsenal of electric guitars. In fact, not a single amplifier was used to animate Woody’s words in these songs, but DKM harnessed all of their trademark power to bring Woody’s lyrics to life.

Dropkick Murphys founder Ken Casey explained, “The project has been a long time in the making. Nora Guthrie thought her father would’ve got a kick out of us, would’ve liked us, that we were somewhat kindred spirits so to speak, which to us was a huge honor.”

In support of this very special and powerful acoustic album, the band will launch their first-ever reserved seating theater tour. Jaime Wyatt will be the main support on the tour – as well as joining DKM on stage for the duet ‘Never Git Drunk No More’ – and Jesse Ahern will open the shows. This Machine…Theater Tour runs from October 20th in Concord, New Hampshire through November 19th in Nashville, Tennessee. Tickets for most shows go on sale on Friday, June 24th at www.dropkickmurphys.com.

The idea for the collaboration that became This Machine Still Kills Fascists has been percolating between Woody’s daughter Nora Guthrie and the band for more than a decade, with Nora curating a collection of her father’s never-published lyrics for the band over the years. The challenge was always finding the right time to pull it together. When Dropkick Murphys co-lead vocalist Al Barr was sidelined in the latter half of 2021 – taking a leave of absence from the band to care for his ailing mother – the band was apprehensive about making a normal Dropkick Murphys album. The perfect time to take on the Woody project had presented itself, and the band leapt at the chance to bring more of Woody’s timeless lyrics to life with a Dropkick Murphys musical twist. The end result is This Machine Still Kills Fascists – the true fruition of like-minded rebellious artists collaborating – albeit nearly a century apart. 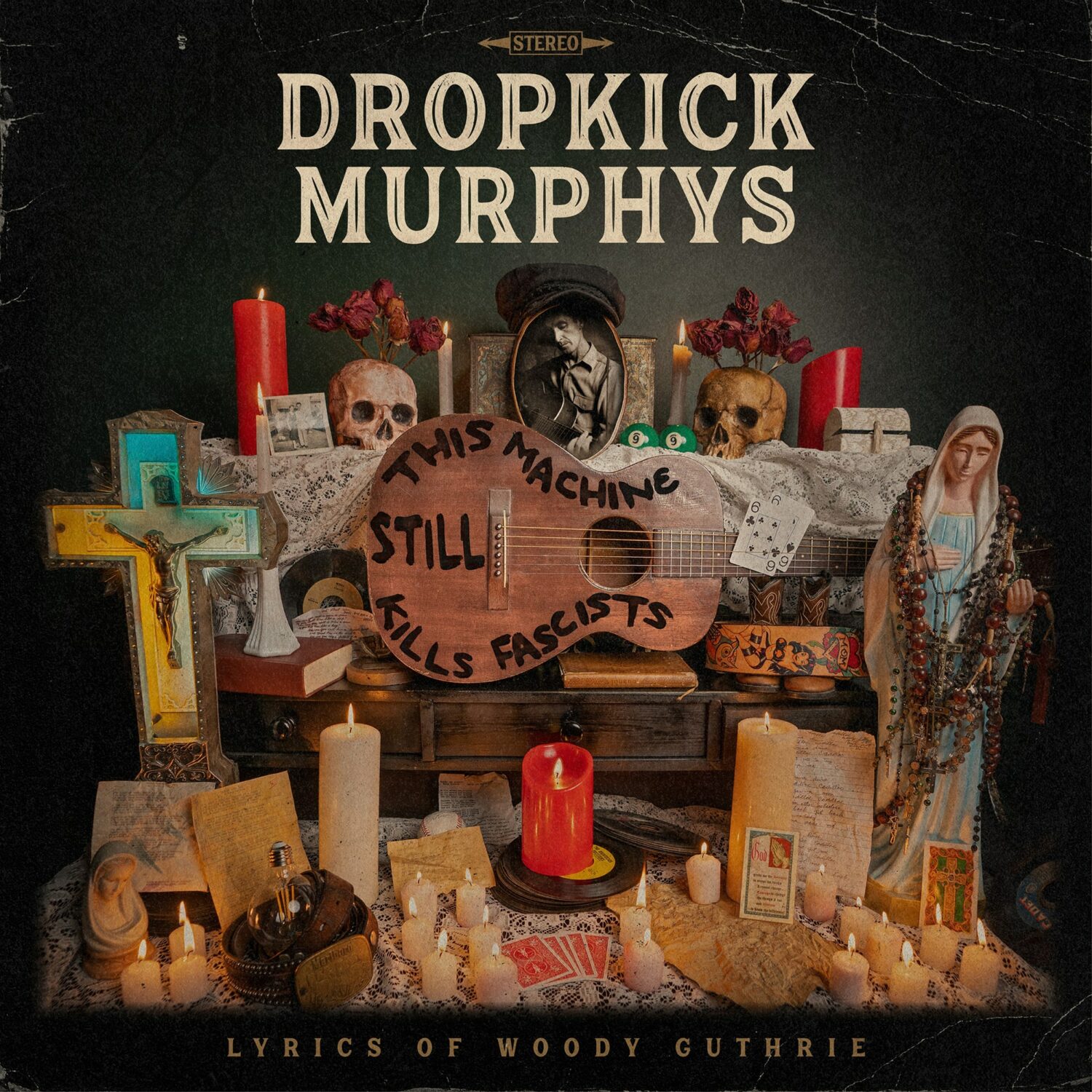 The New Album from Dropkick Murphys

Nora Guthrie explained, “I collected lyrics on all kinds of topics…lyrics that seemed to be needed to be said – or screamed – today. Ken Casey is a master at understanding Woody’s lyrics, which can be complicated, long, deadly serious, or totally ridiculous. Dropkick Murphys are capable of delivering them all.”

Dropkick Murphy’s James Lynch said, “Nora gave us the privilege of going through the archives and selecting some lyrics to use. The common thread that I see through everything was this love for people and this understanding of the universal truth that there is no one person fundamentally better than another person.”

The album title itself pays homage to the powerful message Woody Guthrie began painting on his guitars in the early 1940s, in the midst of World War II: “THIS MACHINE KILLS FASCISTS.” A man and a credo laid bare – on the face of his guitar.

This Machine Still Kills Fascists isn’t an acoustic folk departure for Dropkick Murphys – it’s a continuation of their journey with Woody Guthrie, which began nearly two decades ago when Dropkick Murphys covered Woody’s ‘Gonna Be A Blackout Tonight’ on their 2003 album Blackout. The journey reached new heights a few years later when Dropkick Murphys founder Ken Casey discovered a few scribbled lines about Boston in the Woody Guthrie archive. The band painted Woody’s lyrics about their hometown into a vicious punk missive titled ‘I’m Shipping Up To Boston’, and put the song on their 2005 album The Warrior’s Code.

⇥ ‘Island Of Noise’: the Most Exploratory Version of Modern Nature Yet