Unlike anything Dropkick Murphys have done to date: ‘This machine still kills fascists’ is not a cover or tribute album but a full album of songs that bring Woody Guthrie’s words to life

You could argue that many songs have been influenced or are loosely based on poems, lyrics, books, literary characters, biblical stories and so on but full albums retelling a work of literature or a larger body of work by one author is quite special…

Dropkick Murphys’ latest album is exactly that; their first-ever all-acoustic album, This Machine Still Kills Fascists  breathes musical life into mostly unpublished lyrics by the legendary Woody Guthrie, curated for the band by Woody’s daughter Nora Guthrie. And it’s unlike anything Dropkick Murphys have done to date: A full album of songs that bring Woody Guthrie’s words to life. Not a tribute album or a collection of covers, This Machine Still Kills Fascists is a collaboration between Dropkick Murphys and Woody Guthrie – artists separated by time and space, but connected by a common philosophy – to create something entirely new. 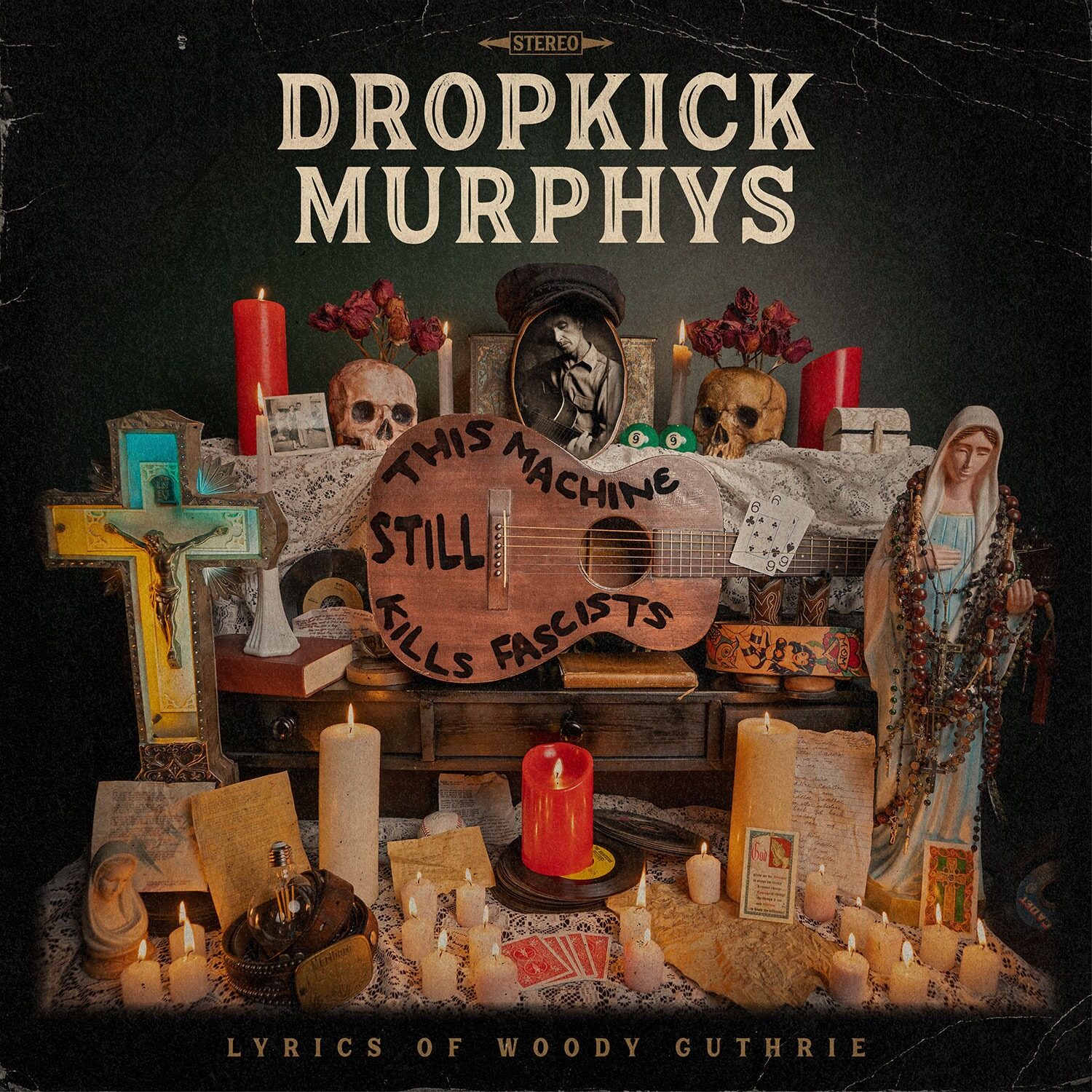 Dropkick Murphys founder Ken Casey also sat down this week with NPR’s Here & Now to discuss This Machine Still Kills Fascists and the importance and enduring timeliness of Guthrie’s lyrics. Listen to that interview: (thumbnail):

Dropkick Murphys’ journey with Woody Guthrie began nearly two decades ago with ‘Gonna Be A Blackout Tonight’ and ‘I’m Shipping Up To Boston.’ For those two songs, Dropkick Murphys pulled Guthrie’s lyrics into their musical world, giving them the DKM treatment through and through. For this album – created from a larger body of mostly unpublished works, curated for the band by Woody’s daughter Nora Guthrie – they knew they needed to enter Woody’s musical world, an altogether new challenge for a band whose raw power had relied on searing electric guitars up until this point.

Dropkick Murphys and their longtime producer Ted Hutt aptly recorded This Machine Still Kills Fascists at The Church Studio in Tulsa (just a few minutes from Woody Guthrie’s birthplace, and the modern-day Woody Guthrie Center). The historic studio was founded by Leon Russell and was the original location of legendary Shelter Records. During the album sessions, Dropkick Murphys made a point to visit Woody’s hometown of Okemah and walk the same streets Woody walked. Retreating to Woody’s home state of Oklahoma to record the album had a powerful effect on the band and the creative process behind these songs. Ultimately, Dropkick Murphys had so much material based on Woody’s poignant lyrics that they recorded two albums, with Vol. 2 scheduled for release in 2023.

The newest single and video from the album, ‘The Last One’ – featuring Evan Felker of Turnpike Troubadours – is also out today. The stark video was shot at The Church Studio in Tulsa (where the album was recorded) and Woody Guthrie and Evan Felker’s shared hometown of Okemah, OK. A working class lament, ‘The Last One’ sees Felker and DKM’s Ken Casey trading verses about the disconnect between the foot of oppression forever pressing on the throats of the working class and the hollow, sanctimonious ideals used to justify that subjugation – while promising “we might lose many a fight, but we’ll damn sure win the last one.”

⇥ This is: Yann Tiersen and His Most Electronic Album to Date, ‘Kerber’