‘EBM’, Editors’ new album. A story of evolution, and an exclusive photo diary of its recording sessions by Justin Lockey

All photos are taken by Editors’ Justin Lockey during the album recordings in 2021 at the beautiful Chapel Studios in the picturesque (sic) village of South Thoresby which sits at the foot of the glacial valley of Swabs in Lincolnshire.

Editors have never been a band who do what’s expected. When they emerged in the early 2000s, university friends from Birmingham, they were swept into a wave of indie groups with whom they had little in common beyond playing guitars. Then, after their 2005 Mercury Prize-shortlisted debut The Back Room and 2007 #1 follow-up An End Has A Start, they switched up their sound for synths. That was their first act of bravery, says frontman Tom Smith, and they’ve been taking risks ever since. “We’re quite used to that feeling of scaring our audience with new material,” he says with a smile.

“It seems to happen with every album,” agrees guitarist Justin Lockey. “We’ll do something that everyone really likes, and then we’ll go and do something else.”

That ‘something else’ is a breathlessly heavy step up, with their seventh album, EBM. It’s Editors’ most leftfield material yet – a thrilling, unrelenting thrust of full-bodied electro-industrial rock. Another new dawn: Benjamin John Power – aka Blanck Mass – has co-produced the album and come aboard as an official member. To outside ears, it might seem like an unusual pairing: an anthemic rock band who’ve headlined Wembley Arena and an Ivor Novello-winning composer who is best known for his abrasive noise projects. Even Benjamin himself admits it was a “leap of faith”. But Editors’ evolution makes perfect sense. They’ve toured with The Cure, of whom they are all huge fans, and are used to playing European festivals where they’re billed alongside harder acts. In Germany, for example, “we’re not seen as some melodic indie band,” says Justin, “we’re seen as super goth.” He adds: “We talked about Rammstein quite a lot when we’re making this record.”

Benjamin’s journey to joining Editors was a surprisingly organic one. He had worked on the band’s last album, 2018’s Violence, giving some songs a more brutal, industrial edge, the full realisations of which came out as 2019’s The Blanck Mass Sessions. That same year, Editors were asked to both headline a festival in Belgium and create a bespoke set for later on in the night. They approached Benjamin to see whether he’d be up for helping to retool their songs in a dancier direction. But with the pandemic underway, the festival never happened and Editors were left with a bunch of new ideas during the ensuing lockdowns that were designed for – as Benjamin puts it – a “dirty rave tent”.

They continued swapping ideas anyway, and the band began buzzing about where this music was headed: shadowier, beefier, exploring their shared love of synth-pop, industrial and alt-rock, it started to feel like a new chapter – the band’s third act. For the first time, the song structures weren’t coming from Tom and he says it was a novel but exciting exercise to receive the files and tinker with them, with Justin, Elliott Williams (keyboards/guitars), drummer Ed Lay and bassist Russell Leetch fleshing out their parts in the studio when they eventually regrouped. “Ben has certainly been a shot of adrenaline in our creative process,” says Tom. “The songs are so immediate, and in your face.”

Making EBM was “a lifeline” during the pandemic, says Elliott, “something to totally get lost in.” Indeed, they’ve created a world brimming with drama and intensity, which is exhilarating after the past few years of collective listlessness. “The songs feel like an escape,” nods Tom. The album title is an acronym of Editors and Blanck Mass but also a knowing reference to Electronic Body Music, the potent sound that originated in the 1980s and which has hugely influenced Editors’ new material, where the synths of bands like Nitzer Ebb, Front 242 , DAF and Skinny Puppy hammer darkly. Think smoke machines, strobe lights and the smell of leather. The band has taken those influences in a distinctly Editors direction: see the soaring falsetto of standout ‘Kiss’, their disco-infused “crying on the dancefloor” banger, says Tom, which Benjamin adds “could almost be a Donna Summer song” if it wasn’t so heavy. Or the punchy chorus of ‘Karma Climb’, a stomping single that pairs ghostly atmospherics with stadium-level anthemia. On ‘Vibe’, which is the closest thing to what you could call a ‘feelgood’ Editors track, Tom wanted to put a “summertime sheen” on “a song for disconnected youth”. It’s Editors at their most super goth, sure – but also their most pop.

For Benjamin, it was an opportunity to flex his melodic muscles. In fact, says Tom, it was the avant-garde producer who brought the poppiest ideas to the table. “I was quite blown away by how accessible they were,” he says. “It was like ABBA or something.” Benjamin, a Nine Inch Nails die-hard, has always been struck by the seriousness and sentimentality of Editors’ music and was also keen to heighten the intensity after a bleak few years. “There’s a strong physicality to this record,” he says of its muscular soundscapes, which certainly echo, in places, the claustrophobia of The Downward Spiral. “I was looking ahead to a kind of a space where it’s sweaty, and bodies are close together.”

For the most part, EBM revels in maximalism. The battle cry of lead single ‘Heart Attack’ sets out their stall, a twinkling rock ballad with a serrated, noirish undercurrent that lets rip into gloriously metallic riffage. From there, it’s a torrid release of beats, blips and broodiness: all killer, no filler; full-on but never overloaded. ‘Educate’ is almost symphonic in scope, as Tom angrily intones about the uncertainty of modern times. ‘Strawberry Lemonade’, meanwhile, is an all-blooping, all-thwacking bodice-ripper, with drums that sound like they might punch out of the speakers. Album closer ‘Strange Intimacy’ is “the most outrageous” of the album, says Tom – “not a particularly happy place to end, as it’s quite a bleak look at a relationship, but the arrangement of it gives it this theatricality.” It’s certainly the most ambitious Editors have ever sounded, where Justin’s “preposterous” guitar riff gives way, he says, to a “mad eight-minute techno odyssey” at the end.

Another about-turn is the jittering crescendo of ‘Silence’ – the album’s post-rock ‘breather’, if you can call it that. Tom’s baritone has never sounded better, recalling a young Johnny Cash covering Nine Inch Nails’ ‘Hurt’. He’s never much been one for direct lyrics. On EBM, there are undeniable references to the pandemic and a divided Britain (“can you feel the broken nation?” he intones on ‘Strawberry Lemonade’) but these are slivers of reality among the abstract, in songs that are largely about losing yourself in the unknown. “I think it’s always better when the listener can draw their own conclusions from what I write,” he says. Justin agrees. “We sit in quite an emotional space, so everyone always wants to know what the words are about, but the music is half the emotion and what sets the mood and the tempo. Sometimes it’s better just to give yourself over to that rather than to try and work out what something means all the time.”

It comes back to this idea of letting the mood take over, of giving in, and getting lost. And it’s going to sound absolutely eviscerating live. It’s a new world, and a new chapter for Editors – as it is for everyone. Time to move your body. 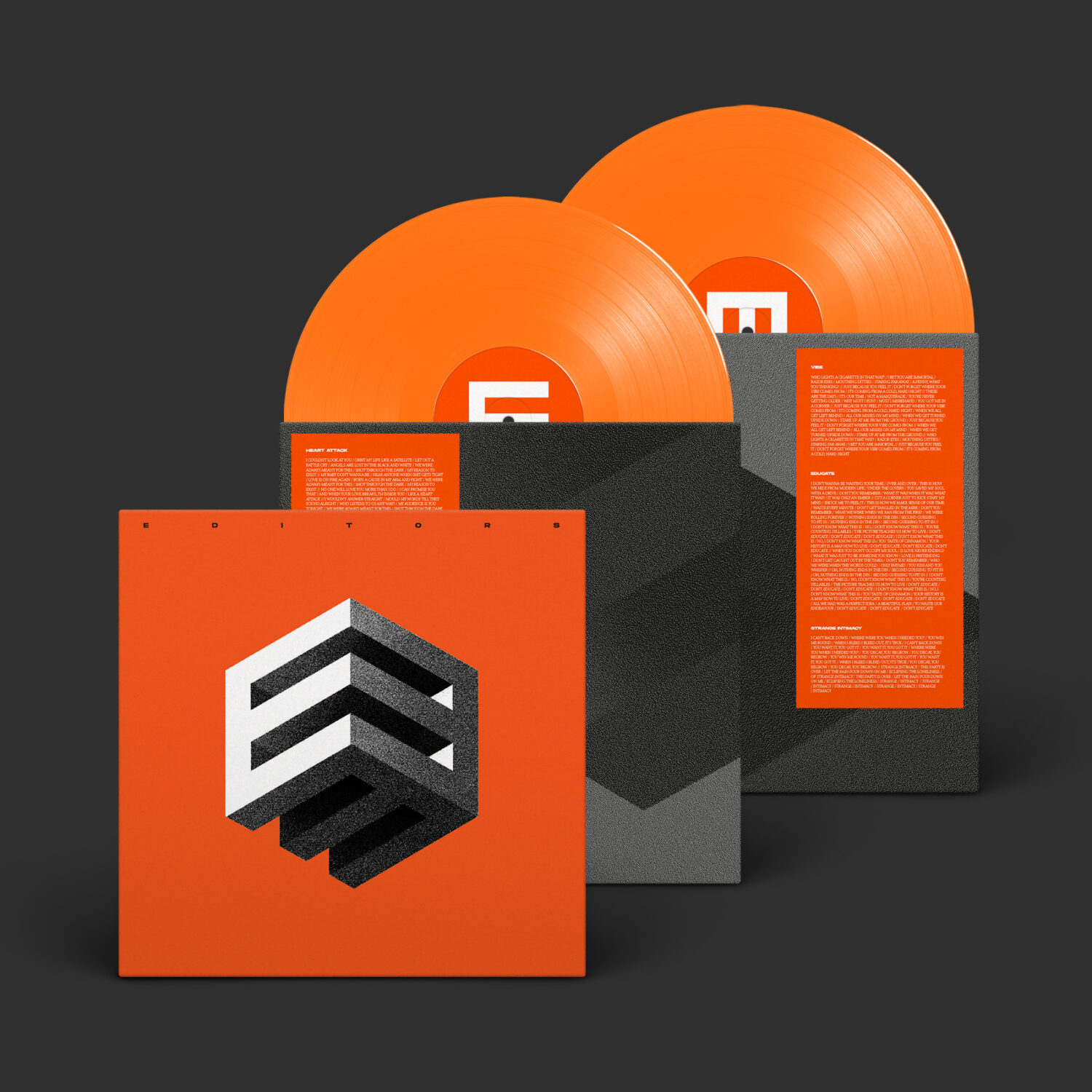 Have a look at Justin Lockey’s Instagram to see more of his work.