Warhaus, the moniker of Belgium’s foremost alt-crooner, Maarten Devoldere, has released new album Ha Ha Heartbreak via Play It Again Sam today alongside a new single and video for “When I Am With You.”

“’When I Am With You’ is a love song about growing up by holding the immaturity of the male condition against the light."

Devoldere says of the new single:

“’When I Am With You’ is a love song about growing up by holding the immaturity of the male condition against the light. It’s the reversed odyssey of the man-child towards the nipple. Let me be your baby.”

Watch the video for ‘When I Am With You’:

It has been half a decade since Warhaus, the brainchild of Maarten Devoldere (Balthazar), suddenly conquered our musical hearts with the triumphant double victory of We Fucked a Flame into Being (2016) and Warhaus (2017). And no, not because he spent his time relentlessly writing and refining new material in Ghent, on the contrary. The songs of the brand-new album Ha Ha Heartbreak came gushing out if him in a mere three weeks in the sultry city of Palermo. All Devoldere needed was the solitude of a hotel room, a guitar, a microphone, and a heart that had recently been broken in thousands of pieces. The sorrow was hard to handle, so, of course, Sicily was an escape. But as it goes, those who try to outrun life quickly run into themselves.

A listener won’t notice this immediately. The smoky opening track and first single “Open Window” drifts on a groove that invites you to swing your hips and snap your fingers. Sure, she’s gone, but ‘Girl, it’s in the future we belong,’ Devoldere still sings a bit too confidently. You believe him, not least because the song results in a subtly euphoric outro that is reminiscent of a French seventies film: a glorious, unabashed romantic theme, carried out by a dozen steamy male voices, soars off on the wings of a sweeping string arrangement and reaches its climax with virtuosic piano notes.

This treacherous contrast between form and content persists throughout the entire album: Ha Ha Heartbreak – even the title is catchy – wraps Devoldere’s sorrow into hooks, instant singalong choruses and irresistible melodies.

‘Oooh let me be your baby,’ the choir seductively sings in “When I Am With You”. It is supported by sexy percussion and laidback funk guitars that learned the tricks from Marvin Gaye or Sade. It’s as if he wants to convince us (her?) that he’s dating again, as if he hopes we won’t look at the lyric sheet. But – this is a tip – we do, of course.

Not much later, in “It Had to Be You”, he admits: ‘You’re mistaking me for someone in control.’

Song after song, Maarten Devoldere dismantles his own pose. He looks at himself without mercy and, honestly, what he sees doesn’t exactly make him happy. As Ha Ha Heartbreak progresses, the hurt punches through the lyrics and vocals with blunt force: ‘There’s the gun shot / there’s the wound still hot / there’s the pain, that pain oh man / how it’s driving me crazy’ (from: “I’ll Miss You Baby”). In “Desire” he addresses just about every god he can imagine, but ‘No matter what I turn to / it’s failing me’. In “Batteries & Toys” he sings rather downcast: ‘I push and shove but the weight of my love hits you like a feather’.

The sound, however, remains wonderfully light. It swings and glows with tantalizing strings, sensual backing vocals, horns, playful piano parts, anything to lighten the load. It allows Ha Ha Heartbreak to be a moving emotional exploration as well as a vessel of great musical richness.

And to say that, in that cursed hotel room in Palermo, he initially had an intimate singer-songwriter album in mind, the kind with fingerpicking guitar and whispered vocals. He didn’t consider producer Jasper Maekelberg, who decided to keep his Sicilian vocal recordings in their integrity. (At the end of “Time Bomb” Devoldere screams out his desperation, and if you listen closely, you’ll hear the neighbors next door angrily banging on the wall.) This gave rise to a reversed creative process: instead of first recording the drums and the music, followed by the vocals, the drummer and guitarist had to orient themselves around the vocals and tune in to the unfiltered heartache of their shattered bandleader. It also meant that Devoldere couldn’t rewrite the lyrics: what we hear, is what we get, the way it poured out of him in the heat of his Sicilian blues weeks. It turned Ha Ha Heartbreak into the most personal and truthful Warhaus albums to date, one in which he navigates the different stages of mourning and grief: starting with denial, passing through overconfident resistance, moving toward despair, to finally arrive at humble resignation in the gloomy conclusion “Best I Ever Had”: ‘All I ever wanted was a lot / to be your man was something I could not’.

In effect, Ha Ha Heartbreak ends with a slice of acceptance, maybe even some comfort, which is relatable to anyone whose heart has ever been broken (to everyone, basically). The new Warhaus does eventually bring forth a big winner: its listener. 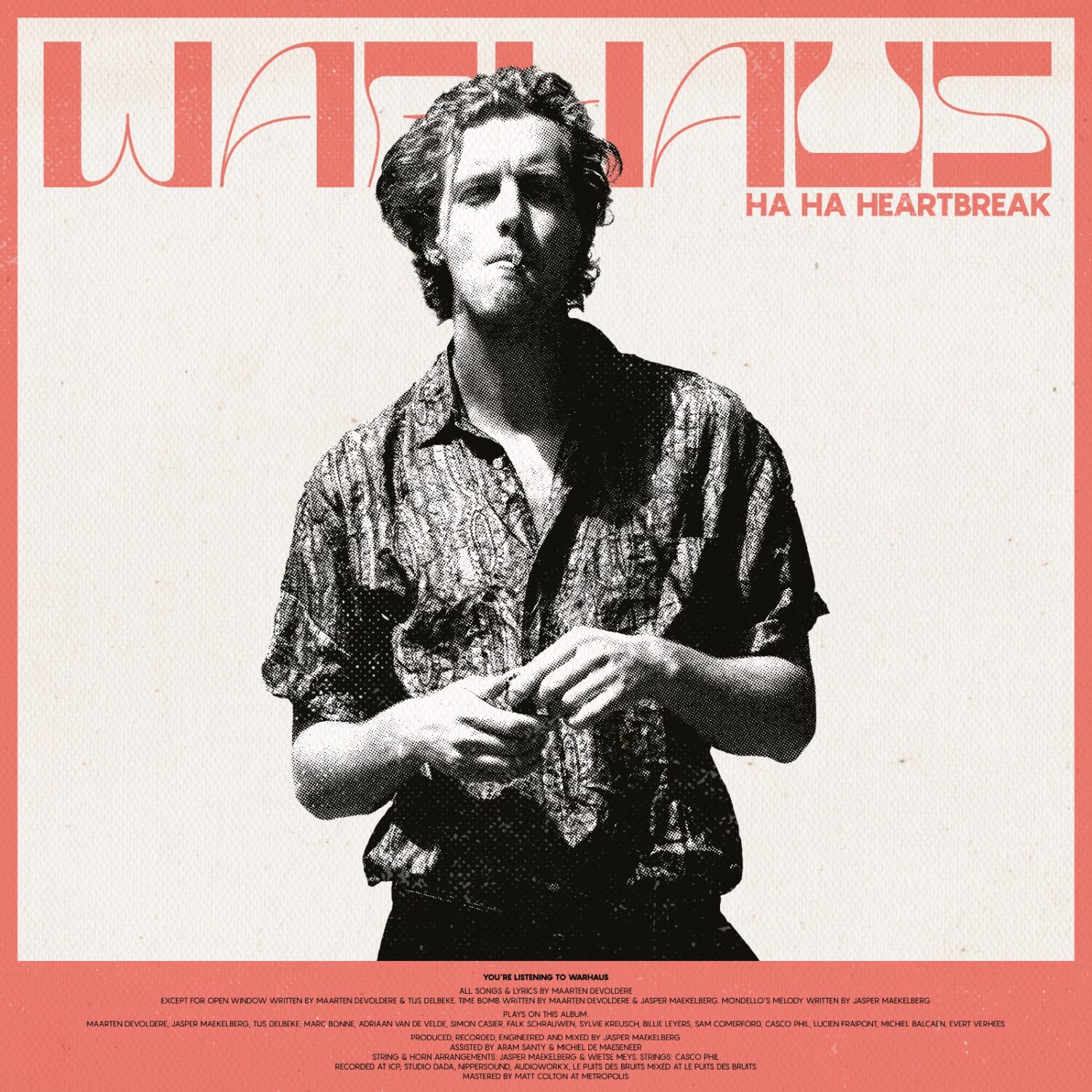