Following the Release of their New Album, ‘Night Drive’, NYC’s VHS Collection Tell us About the Songs that Soundtrack their Night-Time Driving

Night Drive, the new album from New York trio VHS Collection captures the spirit of that titular activity: its liminality, its kinetic excitement, its intoxicating potential and power, its hope and mystery. Each of the record’s ten tracks do this in their own way – sometimes loud and brash, sometimes quiet and calm. But the feeling is just as visceral and real, as serious and limitless as four tires streaking across concrete under the hum of streetlights. In a time of perpetual uncertainty and disconnection, Night Drive is a return to one of the simple, critical pieces of our lived experience via driving drums, stratospheric synths, soaring vocals, and anthemic choruses built to sprint through the night sky.

“We’ve all had experiences driving at night, alone or with friends, on a road trip or some cool place,” says guitarist and producer Conor Cook. “Growing up, that’s a part of how you experience music. You get your license, and you can drive around with your friends listening to your favourite records. For me, it feels like a coming-of-age thing.”

So, we asked James, Conor, and Nils from the band about the go-to songs that soundtrack their night-time driving. Your next road trip just got a whole lot better thanks to VHS Collection.

The Killers: ‘Shot At The Night’ The Killers are one of my favorite bands and have been a major source of inspiration for VHS through the years. ‘Shot At The Night’ is perhaps their most slept-on hit. At its core, it’s a rock ballad, but it has been produced with an electronic edge. This is what we are always attempting to do in our productions. There is a great deal of space in the song, allowing each element to be noticed and reflected on; it starts off mellow with just a few elements, then surges into a gigantic stadium rock chorus. This is a song that begs you to roll down your windows and scream along as you drive on till dawn. Lyrically, it feels open to interpretation – full of meaning, but the meaning is not totally obvious, allowing the listener to get fully into the song without overthinking. Great tune. — Conor Cook Metric: ‘Now or Never Now’ This has been my go-to night drive song as of late. Sonically it has all the elements I love in a good VHS song – driving drums, tasteful synths, big guitar parts, soaring vocals. The lyrics really speak to me as well. My interpretation is that it's about taking risks, doing the things you've been afraid of but that are so meaningful to you. It’s about starting before you're ready and doing whatever scares you the most NOW because otherwise you might never do it. I put it on full blast, roll the windows down, and drive fast. — Nils Vanderlip
Phosphorescent: ‘Song for Zula’ What a masterpiece. Matthew Houck's voice is guttural and makes me really feel whatever pain he is going through – the lyrics are incredible. The opening pad and drum is intoxicating. When I put this on I feel so many things both happy and sad, longing and optimistic. This line always gets me: "See the cage / it called / I said, come on in / I will not open myself up this way again..." He talks about the fear of vulnerability and putting yourself out there in the world, about protecting your heart. It feels obviously like a relationship song but so much more. (Plus, I love the name Zula…) — James Bohannon Modest Mouse: ‘Blame It On the Tetons’ This song got me through high school. It’s both tremendously sad and happy at the same time—I don't even know what it's about, but it puts me right back in time every single time I put it on. It has this lighthearted violin and acoustic element. It's dark and eerie, but also light and pretty. Isaac Brock has so much pain in his voice and lyrics, but when he drops lines about hope and happiness it feels so optimistic. The ending has this beautiful outro as well. It's a perfect near-ending track to one of my favorite albums of all time. — James Bohannon Finley Quaye: ‘Even After All’ ‘Even After All’ is another favorite late night driving song. The groove and bassline just put me in a great mood. It’s a very cool song lyrically – “these sonic fruits, these sonic fruits.” It’s about enjoying life and love in the face of all the negative stuff that's going on in the world, which feels important these days. — Nils Vanderlip The Postal Service: ‘The District Sleeps Alone Tonight’ This song is pure magic. It evokes so many images and memories. Lyrically, it begins as a total mystery, fragments of recollections and reflections that don’t reveal their meaning until halfway through the song. The production steadily builds as the story unfolds; the glitchy drums and quirky synths are indie electro perfection, and I love the rhythmic changes, the starts and stops, and the acceleration of the beat that happens halfway through the track. The guitar makes one bold appearance towards the end of the song then disappears completely. Harmonically and melodically everything just fits so well. The Postal Service’s Give Up has a totally unique sound and has always felt timeless to me through the years. When I am driving alone at 2 a.m. through the desert, ‘The District Sleeps Alone Tonight’ will be played. — Conor Cook

You can check out a full playlist of night driving jams from the band here.

The three friends at the heart of VHS Collection—James Bohannon, Conor Cook, and Nils Vanderlip (multi-instrumentalist and producer)—grew up together in New York City and formed the band in 2015 as a side project while working other jobs, merging modern and nostalgic aesthetics to create their now-signature heart-pumping, arena-ready synth rock and alt-pop.

Night Drive is available now digitally with CD and vinyl set to follow on March 25th. 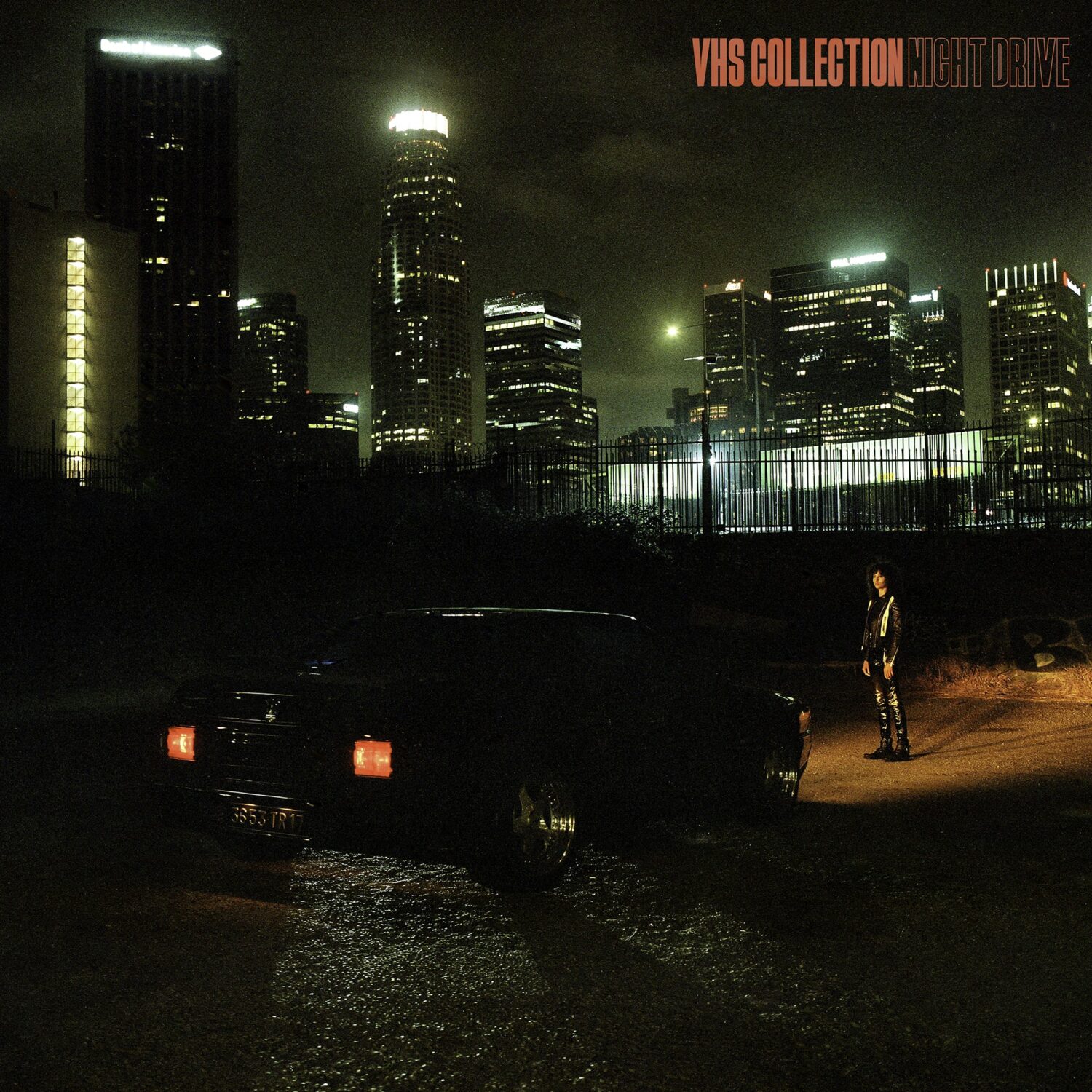 The New Album from VHS Collection