The Ballad of Smith & Burrows could go a little something like this...

Singer in Europhile synth-guitar band meets drummer in Americana-channelling out-and-out rock outfit. Bond over musical interests, both shared (“we’re children of Britpop. That Nineties explosion of guitar bands are the reasons we’re doing what we do”) and disparate (“Seventies and Elton John”, on the one hand, “REM, Eighties, a bit darker” on the other). Record a cover of Black’s deathless 1987 ballad Wonderful Life at home “just for fun”, then realise “there’s something in this”. Record more covers, and four originals, realise the results are pleasingly “wintry” and release them as the album Funny Looking Angels, which is that rare and elusive thing: a seasonal LP that rewards repeated listening. Critics, fans, and concert-goers agree.

And then, for the best part of a decade, silence from the duo. Life, children, other projects took over.

Alas, Smith and Burrows: it was good while it lasted.

“We did always think we’d do another album,” begins Andy Burrows, former drummer in Razorlight. “We always knew we’d do Smith & Burrows part two because we knew we could do something great together,” echoes Tom Smith, frontman with Editors. It was just all about finding the time.

For a good few years, with musicians this in-demand and busy, that wasn’t so easy. Multi-instrumentalist Burrows is a prolific solo artist, a popular stand-in musician (both We Are Scientists and Tom Odell have called on his services as a writer and for extended periods of touring) and Ricky Gervais’s musical wingman of choice: he wrote songs for (and acted in) David Brent: Life on the Road and has scored both seasons of the comedian’s hit Netflix series After Life.

As the group’s main songwriter, multi-instrumentalist Smith has been at the helm of Editors for six albums, a remarkable run – accelerated by incessant touring – that has seen the five-piece become one of the biggest British bands across Europe. Last year they summed up their 15-year career in a 16-track greatest hits, Black Gold. Away from the band, Smith has also been working on an album with Italian composer Luca D’Alberto.

No wonder their creative minds and energies were often elsewhere.

“I remember Andy talking about the idea for Straight Up Like A Mohican years ago,” says Smith. “That was when we were touring together in Paris, with First Aid Kit supporting us,” affirms Burrows, which date-stamps the spark of the idea at 7th December 2011, two weeks after the release of Funny Looking Angels. “And I was walking round singing that line. Tom said: ‘Stop singing that out loud, someone will nick it!’ It was just a little idea I had kicking around – and obviously, it’s a little bit daft.”

Fittingly, that first idea is the anthemic last song on Only Smith And Burrows Is Good Enough, the second album from these old pals and collaborators, recorded by the pair in the summer heat of Nashville with producer Jacquire King (Tom Waits, Kings Of Leon, Norah Jones). As writers, neither of them is ever going to lean forward with shining eyes and whisper to the other: “You complete me.” But, well, as proven by these 10 new tracks – all originals this time, with nary a sniff of Christmas – there is romcom-level magic in this creative marriage.

Simply, these are songs to lift the heart, the spirits, and, occasionally, an exultant fist.

“I remember Tom sitting at his really cool mixing desk in his loft in north London, wearing his glasses, looking cool and studious, and I’d go: ‘We need a song that goes, ‘der-der-der in the rain’. And he’d go: ‘OK, sure…’ Then he’d work out how to do that.

“That’s what’s great about writing with Tom. It’s such a joy, because when you collaborate with someone, what you really want is to be absolutely, unashamedly you – and not worry about it. There shouldn’t be too much worrying or thinking. And I can do that with Tom. Unless my idea is total shit, obviously.”

“I’m not a producer at all,” insists Smith, “but I understand how to develop songs. Andy’s ideas come out very quickly, and I’d try to find the bits that resonated with me then work on them.”

I don’t know why I’m sad and Seventies. What the fuck?

The new songs came together in bits and pieces over the last few years, the ideas flowing in both directions.

Smith recalls being on a tour bus somewhere and receiving from Burrows “two-thirds of I Want You Back In My Life,” a glorious, gauzy, hazy mid-tempo ballad that disarmingly wears its heart on its sleeve.

“I am very emotional,” acknowledges Burrows with a rueful smile. “That song came out quite complete, but Tom beefed up the chorus in a lovely way. It was like that with Bottle Tops too,” he notes of the unashamedly Eighties New Wave synth-pop banger that he wrote while in New York on We Are Scientists business (a visit that also saw him flesh out Straight Up Like A Mohican).

“I sent it to Tom, then he added in his studio gubbins,” he adds, where “gubbins” is a technical term for the “sensibility” of the demos for the new album. As Smith explains: “We were using synths and drum machines and arrived at the idea of the songwriting and acoustic guitars being upfront, and the melodies, then working out who sung what.”

Then, when Burrows supported Editors on tour in Europe in late 2018, he’d join Smith onstage nightly to duet on a song the frontman had recently written. That was All The Best Moves. Two years on it’s the opening track on OSABIGE, with Smith highlighting its confidence, Burrows citing that the fact that it’s so “up and obvious and immediate”, and the irresistible takeaway being that Smith and Burrows’ way with an out-and-out pop song is a joy to behold.

Old TV Shows is another song to be filed under Big Tune Moment, albeit one with a melancholic undertow. “It’s a song about looking back fondly at broken relationships,” says Smith. “Those moments in your life that were never gonna last, that when viewed through a hazy nostalgic filter seem so much more beautiful than they ever probably were… Just like Top of The Pops.”

That melancholy, he wants to clarify, isn’t all down to him. “Everyone says I’m the dark guy!” laughs the musician whose other band have, you might, something pop noir about them. “But I remember working on Old TV Shows. Andy wrote the verse, I wrote the chorus. He’s doing this outpouring of real sadness then I swan in with: ‘Don’t worry, it’s in the past, it burned too brightly, move on!’”

“I don’t know why I’m sad and Seventies. What the fuck?” laughs Burrow. “I was only one in the Seventies. No, I was nought!”

As well as completing each other’s songs, and/or amplifying their hooks, and/or maximising their emotions, the pair’s voices – Smith’s caramel baritone, Burrows’ Crosby Stills and Nash-adjacent higher register – also complement each other magnificently.

That’s especially true on Too Late. It just might be a north London indie take on Kenny and Dolly’s Islands In The Stream as the pair trade verse and chorus and differing takes on the viability of a romantic relationship.

“It’s an end-of-the-world love song, sitting there together, watching it all fall apart,” Smith offers of a song that originated with him. “And Andy came up with the big belting chorus.”

As for the vocal interplay, they credit their producer with apportioning lead, supporting and harmonising vocals with intuitive confidence. As Burrows says: “Neither of us are precious about who sings what. It’s always what’s best for the song. And Jacquire understood that – but he also pushed the idea of the songs, vocally, being Smith and Burrows. So it’s a really lovely equal vocal distribution.”

We’re not a band, we’re just two songwriters with lots of other things going on.

There’s more bittersweet-ness on Parliament Hill, which shares connective tissue with When The Thames Froze from Funny Looking Angels – and not just for geographical London reasons. It’s a hymn to romance and the spaces and places it plays out. With both writers having moved out of London in the last year, it has added resonance for its creators.

“That’s my favourite song on the record,” says Smith. “And it’s a beautiful song for now when we’re all craving connection to people and places. That song encapsulates a real, still, moment.”

BONUS: watch the exclusive Behind The Scenes of their MAT WHITECROSS directed video for ‘Parliament Hill’.

The other place in OSABIGE is Nashville. They went there for King, whom Smith knew from the making of Editors’ 2013 album The Weight of Your Love.

“Jacquire was so important for Andy and I because we needed a producer who could help us make this a whole thing. Writing scraps of songs in my attic over three or four years, some being great, some potentially great, meant we had to weave it all together. But whereas a band has a personality from being on tour, or in rehearsal rooms, spending a lot of time together, we can’t have that. We’re not a band, we’re just two songwriters with lots of other things going on. So we needed a producer who had a vision, one that aligned with ours.”

Sonically, the pair wanted to steer a path between the “very acoustic” Funny Looking Angels and “being too poppy and going too far down that line”. King, Smith observes, had the experience they needed. “I know he can make classic-sounding records like Norah Jones’ The Fall and Kings of Leon’s Only By The Night,” he says of the parent album of Sex On Fire and Use Somebody. “And I know he can make an acoustic guitar sound amazing. So we loved his ideas and his vibe.”

“side-project” doesn’t do justice to the full-album completeness of these [...] 10 tracks.

Smith and Burrows duly spent six summertime weeks in Tennessee heat, recording, arranging, harmonising, hanging out, and marinating themselves in both vintage whisky and vintage guitars. Tough gig, but someone’s got to do it.

It was a song-drenched experience in one of the world’s great music capitals that also gave the pair the title for their second album. Marveling at a friend of King’s guitar collection, these fret-spotters noted that 1940s-era Gibson guitars bear the slogan: Only A Gibson Is Good Enough.

Only Smith And Burrows Is Good Enough, then. Technically, yes, it’s a side-project for two player-pals with demanding musical day-jobs. But “side-project” doesn’t do justice to the full-album completeness of these methodically gathered, carefully written, lovingly finessed and warmly produced 10 tracks. Conceptually and in terms of the wonderful outcome, it’s more like “a middle project!” as a smiling Smith puts it, not entirely seriously, but not entirely jokingly either.

“It’s the most idyllic musical getaway that I could ever have dreamed of having,” concludes Andy Burrows. “In another world, Smith and Burrows could legitimately be a full-time band. But we both quite like that it isn’t.”

“No matter how busy we each were with other things, I never thought this second album would not happen,” re-states Tom Smith. “I don’t think we could stop it from happening. It has its own force, which is the power of our collaborative writing and voices. Although it did take a while.”

“But the great thing about this gap is that this will always be a cool place we can go,” says Burrows, “somewhere we can get away from our other musical projects, and be musically and lyrically and creatively completely open. And in eight to ten years we might do another one!” 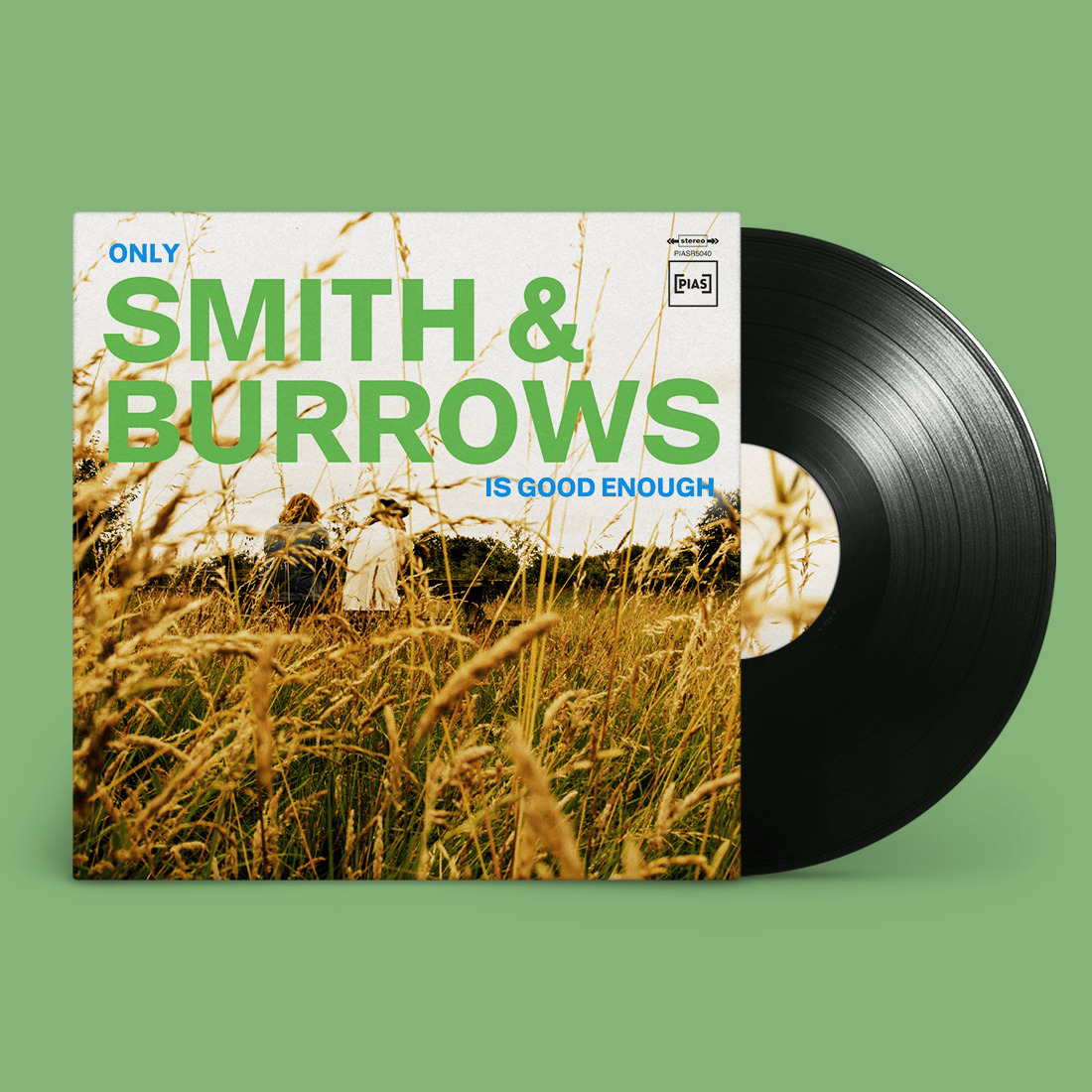 ONLY SMITH & BURROWS IS GOOD ENOUGH