Kay Young Shares the Opening Track to her Forthcoming EP, ‘This Here Feels Good’: a Collection that Oozes with Fluidity and Conviction

Sometimes in life, patience is the key to unlocking everything that you always knew you were destined to be. For Londoner Kay Young, music has always been an effortless second language, but the confidence to fully realise her own greatness has taken serious determination, trusting that the right timing would fall into place. As a result, the Kay that exists in 2021 is one of intuitive, alchemic magic – an artist primed and ready to soar.

It all began in the school music huts. Available only to Year 9 and above, an 11-year-old Kay would sneak in, convincing the attending teacher that she knew exactly what she was doing. “Really, I had no idea”, she laughs. “But I went into the music tech room, and I made my first beat. Growing up in church, watching my dad practice in the living room, my mum working as a backing singer – you don’t realise how much you soak up until you’re put in an environment where it’s like okay, cool, show me what you got. I remember meeting my brother at the music block, playing the drums, and just thinking, oh my gosh, I guess I’m doing it.”

As someone who often struggled to concentrate in academic lessons, drums (and the music block) became a welcome haven, a place where Young could build herself into the kind of rapper, singer, and producer that she had grown so accustomed to watching on her dad’s old VCR recordings. “I’m a fan of everything; hip-hop, jazz, R&B, you name it. My dad listened to Eric Clapton, Pink Floyd. When it was time for me to kind of shape my sound, you could hear elements of all of those, but almost because I could make anything, it got to the point where every song sounded completely different. It took me about 10 years, long story short, to find my own sound and feel comfortable with it.”

When it comes to Kay, comfort is most definitely key. Her music oozes with the fluidity and conviction that comes from giving yourself grace, from speaking when there is something you truly need to say. Knowing oneself in the way that Kay does tends to breed confidence in others, so it perhaps shouldn’t have come as a surprise that her talents pricked the ears of US hip-hop elite. And yet when the management call from Roc Nation management came, Kay was only just recovering from a serious confidence wobble.

“Someone as big as Jay Z and Jay Electronica, such a big team and a big label, you’re never thinking that they’re going to want you to be on their team,” she laughs. “I was just making beats in my bedroom; why me? I had actually taken time out; musically, I felt like I had nothing new to say, so I did other things, spent time with my friends, did a lot of travelling. Six months off became two years, but by the time I got back, the industry had changed. Social media had changed everything and I started to be very fearful, thinking am I good enough? I even told my friend that I didn’t even want to do music anymore, I didn’t think it was for me. I had to find a way to refuel the passion.”

Bolstered by the encouragement of her community, Kay decided to ease herself back into music-making via Instagram. “For 30 days straight, I’d come home from work, make a track and then perform it on my drum machine. I don’t know how it caught Jay Electronica’s ear, but he followed me, and kept watching my stories. For a few months that was it, and then one evening I was walking home from work when I got a message. I open the picture, and it was a conversation between him and Jay Z, talking about how dope I was and setting me up for a call with their UK Roc Nation team.  The following week I was flown out to LA.”

Kay might have obtained one of the highest accolades of US label approval, but her flow, focus, and down-to-earth energy strongly embody the British experience, her London dialect flowing through her tracks like a familiar friend. Having released 2020’s ‘Middle Matters’ EP to strong critical interest, she had initially set her next sights on the release of an album but decided to take the moment to build herself a solid foundation, paving the way to a more lasting legacy. As a result, ‘This Here Feels Good’ is the work of an artist who knows how to trust the process, allowing her creative confidence to breathe in its own right. 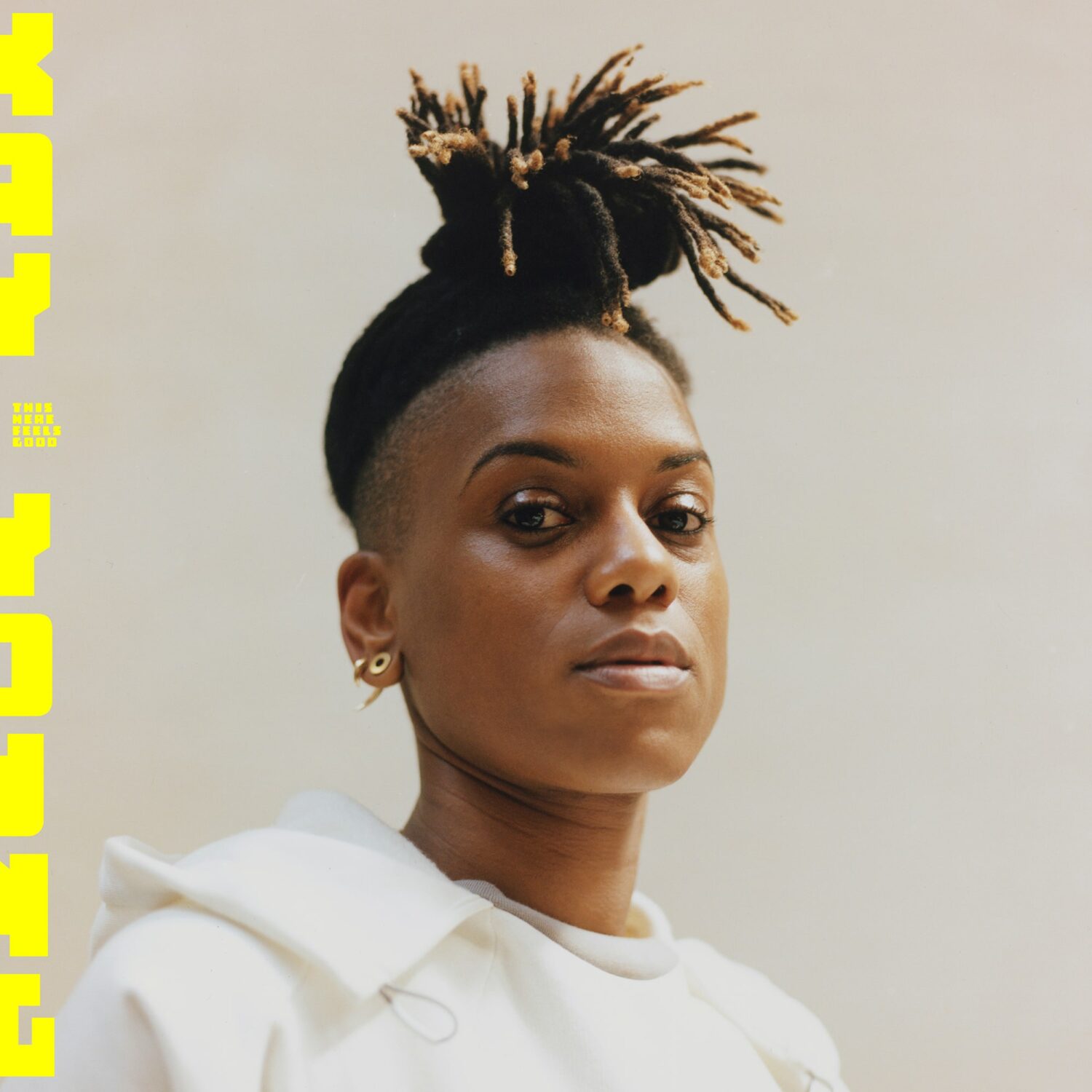 The New EP from Kay Young

“‘Middle Matters’ was a dope EP, it was very personal and gave people an insight into me. But with this project, I wanted to kind of expand a bit,” she says. “I feel like it can sit on all different platforms, radio, TV. I want to show off, musically speaking! So with the strings, the brass section, I brought it all back to college musicianship, to make it sound like a big collective.”

Though Young kept her focus on cohesiveness, her stimuli remain just as eclectic as ever. Citing Kendrick Lamar, Chance The Rapper, and The Carpenters as key sonic influences, ‘This Here Feels Good’ is a project that speaks to the dualities of the human experience, finding a balance between lyrical vulnerability and musical uplift. A kind of gentle education, it invites the listener to know Kay a little better, watching as she expands on styles of dance and soul that she might previously have only been dabbled in.

As a moment of personal pride, opener ‘I’ve Got You’ (ft. JNR WILLIAMS) is a particular emblem of survival, a moment to take stock and strength from those around you.

“This is the mad thing about music; when I listen to it back I think, woah, I actually did that! Sometimes I don’t even know what I’m thinking until someone else is able to articulate it back to me. Even though ‘I’ve Got You’ is a fast, uplifting dance track, it seems to get people very emotional. I think it’s just the hook, and what we’ve gone through this last year alone — it’s a perfect song for the now.”

While ‘This Here Feels Good’ is an EP of great joy, it also doesn’t shy away from tougher subjects. Lead single ‘White Teeth’ continues ‘Middle Matters’ exploration of familial legacy and cultural relation (“All I heard growing up is you’ve got to work twice harder than your white friends”), but still keeps an air of optimism, striving for a better future. Determined to use her platform as an artist, Kay was also involved in the BT Sports anti-racism video ‘Time For Change’ which marked the one-year anniversary of George Floyd’s death.

“I saw the email and almost wanted to decline because I know what comes with this responsibility, but I thought to myself no, I need to do my part,” she says. “It was an amazing opportunity, and it touched a lot of people, made them realise how much more has to be done.”

The ‘This Here Feels Good’ EP will arrive on October 8th, 2021 via Play It Again Sam.

“Last year was so heavy, and we’re so used to just talking about certain situations within our own communities. But it got to the point where we could no longer hold it in anymore. So whether it’s talking to people who are not of colour, people who are not your close friends or going on social media and talking about it, it was almost like a cry for help, because I don’t think you realise how much you carry it until things are brought to the surface. I’m a very sensitive person, and I don’t think I realised before how much I carry until I start writing and it all comes out in songs.”

No artist’s journey is the same, but by embracing the twists and turns of her own pathway, Kay Young is fast learning to trust the childhood intuition that got her here, to know that everything she needs already lies within her. On ‘No Regrets’, her confidence is clear: “You know where to find me/I’ll be on my A-game”. After so long working to find her place in the industry, does she finally believe that she belongs?

“Definitely. Oh, my gosh!” she laughs. “Taking those two years out was the best thing I could have ever done, because I found out who I really was as a person. For me to even be able to be talking about certain experiences I’ve gone through with music, that’s because I’m on a different level of confidence now. It’s going to sound so cliché and cheesy, but I’ve been blessed with such a talent. Who am I to sit back and not do something with it? Doing it even though you’re fearful doing it; that’s the biggest form of courage.”