Slinky. Stylish. Sexy. Balthazar’s newfound loucheness suits them well. Hot on the heels of last year’s Fever – a warm, sinuous collection of songs shot through with Southern grooviness – comes Sand, a record that heads in bold, exciting new directions, and cements the Belgian band’s status as Kings of soulful alt-pop. “We felt that with Fever, we hadn’t pushed it far enough,” says co-frontman Maarten Devoldere. “So that was the starting point – take it further.”

Written largely while touring Fever around the world throughout 2019, plans had been made as soon as that record was released. “The idea was always to drop another album as soon as possible,” says Jinte Deprez, fellow co-frontman and Devoldere’s best friend and songwriting partner since high school. Refreshed following their solo excursions – Deprez, under the nom de plume J.Bernardt with his R&B infused Running Days, and Devoldere with the languid, torch song influenced Warhaus – it was, say the pair, “fun being back together, so we wanted to make as much music as we could.”

Keen not to retread old ground, the band put their experience to good use, mapping out a smooth, cinematic soundscape for their songs to smoulder in. Sand marks several firsts for them, with Balthazar sounding every bit as fresh and energised as they did back in 2010, when their debut Applause wowed critics and the public alike. And for album number five, their masterful command of melody and pace is on full display – Sand is unique in the way it melds minimally arranged pop to elegant electronica and sophisticated grooves, with defiant sparks of frisson sprinkled liberally throughout.

Balthazar never repeat themselves, and having excelled in numerous styles and genres – Rats’ classic pop and Gainsbourg-esque swagger; Thin Walls’ groove-laden, grizzled indie-rock – Sand confirms their songwriting talent and legacy as fearless innovators and restless creatives. It’s also a record infused with a special sense of poise and grace, and inspired by the joy they find playing live.

You just work with what you’ve got, and do whatever it takes.

Playing smooth sunset jams and seductive, graceful rhythms and melodies every night bled naturally into the new material they were writing, a fluid and uninhibited process that carried on after Covid-19 forced them off the road and back to Ghent. Stuck at home under lockdown, the writing and recording continued, albeit in a somewhat constrained manner. “We had to work remotely and converse electronically rather than in a studio,” says Deprez. “It was a very modern way of making an album.”

But necessity is the mother of invention, and it led the duo to explore new musical avenues and find creative solutions. “We did a lot of things that we haven’t done previously – we’ve never used as many drum samples or used bass synths before,” says Devoldere. “That was exciting for us, and worked really well for these songs.” Deprez agrees: “You just work with what you’ve got, and do whatever it takes.”

The result certainly betrays no sign of the complicated manner in which it was realised. First single ‘Losers’ is a laid-back disco gem, all soft, warm synths and falsetto vocals. “It feels like we are losers on the verge of something great”, they sing, encapsulating the song’s sense of not letting today’s travails temper one’s optimism. Both ‘On A Roll’ and ‘Leaving Antwerp’ unfurl at a similarly languid pace; the former’s glitchy undertone and neat, picked guitar add a note of tension, while the latter is chill-out pop at its finest, hushed vocals and a gentle funk bassline floating through your ears like a warm breeze. There’s even a mourful sax solo.

That sax reappears on ‘I Want You’, a track that’s powered by a thick bass squelch and finger clicks. It’s not the only hint of jazz, either here or on the album as a whole; listen close and you’ll hear some snare brushes. ‘You Won’t Come Around’ most obviously borrows from jazz rythms and bass, as does ‘Powerless’s double bass and soft, elegant piano lines. Brass and horn parps adorn opening track ‘Moment’, as do bustling drums that carry a dintinct Afro-beat tinge.

Ever the musical magpies, melding such ecletic and diverse influences in their work – sometimes even in the same song – are evidence of the magic that happens when Deprez and Devoldere create together and their thirst for less rigid songwriting parameters. Freeing their inspiration as it were. “We work like producers in a way,” says Deprez. “This time, Jinte and I knew better what we wanted to do from the beginning,” adds Devoldere. So it is that the sun-dappled tropicalia of ‘Hourglass’ sits effortlessly alongside the glistening, late-night disco of ‘Linger On’ and the quiet, pop bliss of ‘Passing Through’.

There is, say the pair, an overarching theme for Sand, but one that only revealed itself as they were writing and recording; time. Or rather, more specifically, “waiting, restlessness, not being able to live in the moment or putting your trust into the future,” they say. “We’re at a point in our lives when we have to consider these aspects of life, and that’s why the album is called Sand – after the sand in an hourglass.”

Hence the artwork, a photo of piece by renowned Dutch sculptor Margriet Van Breevort who specialises in hyper-realistic sculptures. Titled Humunculus Loxodontus, AKA The One Who Waits, and originally commissioned by a medical centre in Holland, it represents, says Devoldre, “the way you feel when in a waiting room, obliged to wait and feeling self-conscious and awkward. The more we researched it, the more it fitted the idea of the album.”

It is a surreal and somewhat alienating image – difficult to pin down, much like Balthazar’s artistry and unique musical outlook. And waiting, that sense of everything being on pause is, of course, currently a very apt concept. The double meaning is, admits Deprez, “kind of fitting”.

And so for now, just like Humunculus Loxodontus, Balthazar must wait, poised to take these songs on the road and spread the joy of live music and human connection. To feel alive. “We just want to share it with people, you know?” says Devoldre, “and we can’t wait to play it live.”

Balthazar have announced a full European tour in from September to November later this year, find all details here.

And on this special day, everyone is invited to join the listening party of ‘Sand’ tonight Friday 26 February 8 pm GMT / 9 pm CET with Jinte & Maarten on Balthazar’s channel! 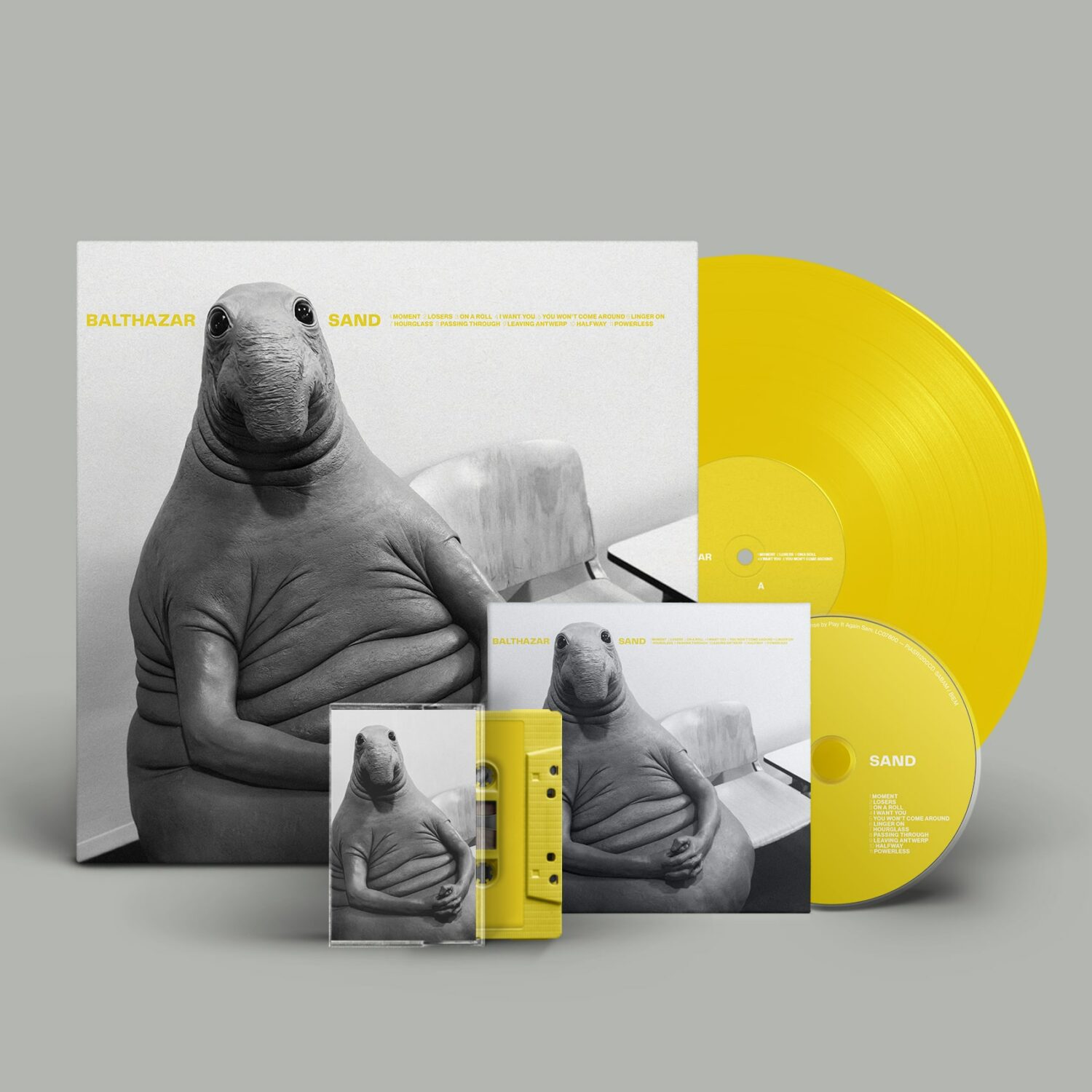