Arising from claustrophobic situations, Fontaines D.C. are back with a sophomore album with the loaded (and/or cheeky) title of "A Hero's Death"

Fontaines D.C. have a way with mission statements. “I don’t belong to anyone/ I don’t want to belong to anyone” frontman Grian Chatten drawls in the chorus of I Don’t Belong, the opening track of the band’s new album A Hero’s Death, sounding like someone riddled with angst yet resolved to protect their own freedom at all costs. If not a retreat, it almost sounds like a defensive rebuke of “Big” — Fontaines’ last album opener, the one that rushed out the gates hungry to consume the whole world while proclaiming “My childhood was small/ But I’m gonna be big!” The fact that Fontaines D.C.’s new album A Hero’s Death begins with I Don’t Belong is hard to take as anything but a pointed inversion, the music moodier and the lyrics more searching. Though the tone is noticeably different, the introduction is no less intentional: This is not the same Fontaines D.C..

Last year, Fontaines D.C. released their debut album Dogrel to widespread acclaim, garnering a legion of fans worldwide along the way. They toured behind it relentlessly. In another time, this would be nothing but a success story: A young band delivering on the hype rather than being swallowed by it. They should have been riding high; it should have been nothing but a triumphant year. But to hear the band speak of it, the whirlwind experience almost destroyed them.

Suddenly on the road constantly, the band’s members — Chatten, guitarists Carlos O’Connell and Conor Curley, bassist Conor Deegan III, and drummer Tom Coll — found themselves growing not only distant from one another but distant from themselves. “We experienced full journeys where we didn’t speak to each other,” Chatten remembers. “It wasn’t because we didn’t love each other anymore. Our souls were kicking back against walls that were closing in. We had no space for ourselves. Our souls had nowhere to live, nowhere to lie.” Soon, Fontaines D.C. reluctantly had to cancel planned shows, finding refuge in writing sessions back home in Dublin and rediscovering what it was that made them want to be a band in the first place.

Now barely a year after Dogrel, they’re back with a sophomore album with the loaded (and/or cheeky) title of A Hero’s Death. It’s an album that builds on what came before at the same time that it seeks to burn down a certain idea of Fontaines D.C. Arising from claustrophobic situations, they have returned with an album that expands outward, an evolution necessary for survival.

The title track and lead single were written, on some level, in direct response to Dogrel.  Chatten first jotted down the lyrics during a playback of the band’s debut. “I was consumed by the need to write something else to alleviate the fear that I would never be able to do it again”, he explains. In a sense, this is true of the entirety of A Hero’s Death. “When we wrote this album it was a reaction to the success of Dogrel”, O’Connell adds. “We started to feel very detached from who we were when we wrote Dogrel”. The genesis of the album itself began on the road, the band having a couple of beers or whiskies and trying out ideas in the back of a van while driving through America in the middle of the night, taking the scarce hours between one gig and another to re-centre creatively and as friends.

The result is something altogether darker and more impressionistic than Dogrel. Far from repeating the short stories and character sketches that dominated their debut, A Hero’s Death finds a band grappling with isolation and disorientation by crafting music that is more introspective, looking inwards and trying to make sense of their experiences as their sense of reality melted further out of the frame. Chatten’s lyrics have taken on a radically different approach, dispensing with the more literal qualities of Dogrel in favour of more personal writing and, as he puts it, “imaginary universes” to escape into in order to get away from the mental health struggles of touring heavily. 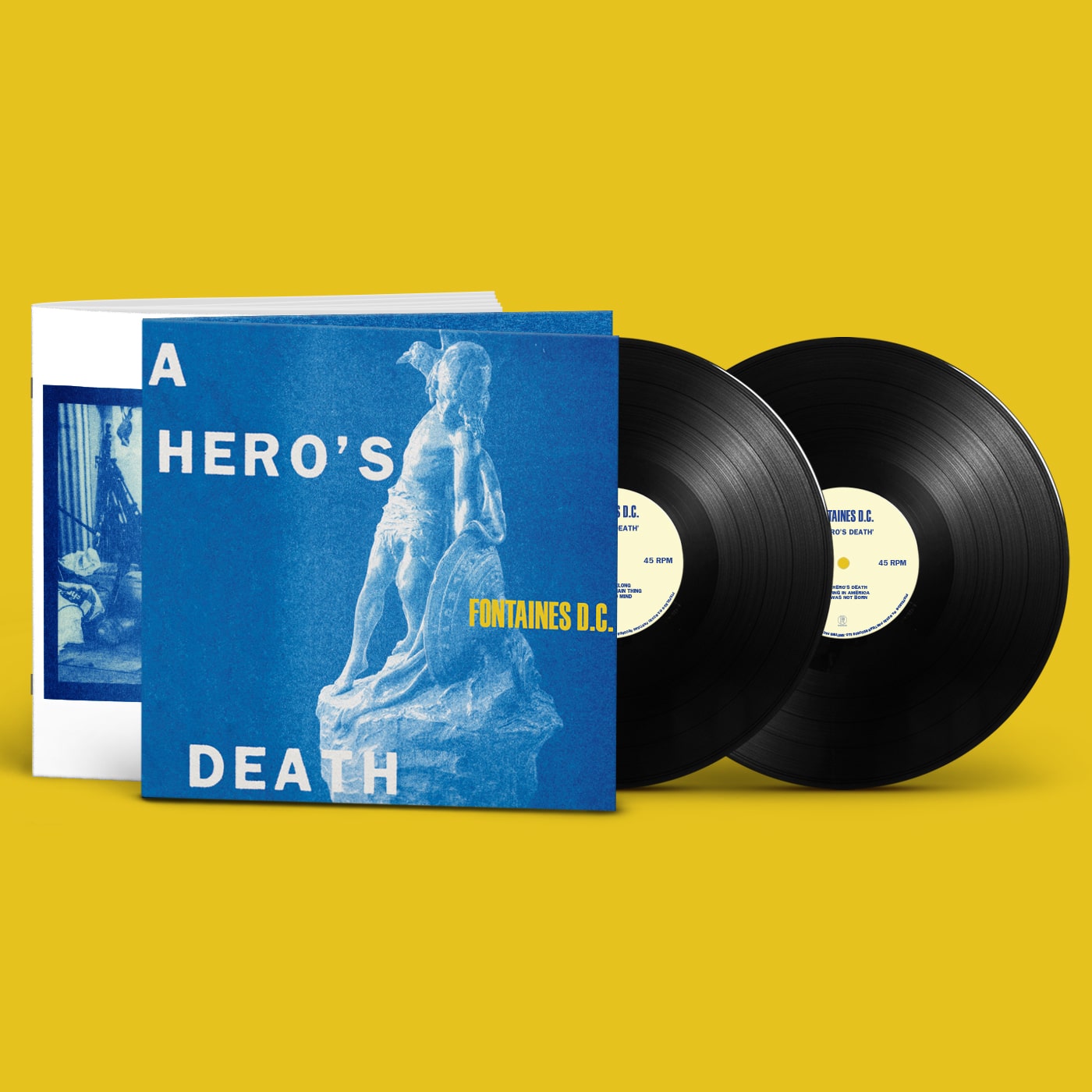 To record A Hero’s Death, the band rejoined with producer Dan Carey in his London studio. While Carey once helped them capture the raw sound of the band’s live show for Dogrel, collectively they achieved a different goal with A Hero’s Death. Citing influences from Suicide and Beach Boys and Leonard Cohen to everyone including Beach House, Broadcast, and Lee Hazlewood, the band carved out a more atmospheric, sombre sound for themselves. The songs heave and drone; much of it is too wounded to approach anthemic, even while the litanies of Love Is The Main Thing or the surging churn of Televised Mind are still plenty easy to get stuck in your head.

What’s going to perhaps surprise fans the most is the more restrained, spectral balladry the band explores on a good portion of A Hero’s Death. In an effort to slow their own minds on tour, and in an effort to challenge people’s preconceptions of what Fontaines D.C. could be, these songs often feel like the core of the album. You Said is a yearning, bleary rumination built on strained guitar lines O’Connell and Curley wrote in a hotel room after one particularly listless and depressing day in Brussels; Oh Such A Spring dresses a folk tale in glossy modern touches, approximating the imaginary worlds Chatten was seeking. The one-two of Sunny and No end the album on a note of resounding emotional reckoning.

The bones of the album’s oldest songs — A Hero’s Death, I Was Not Born and Televised Mind — all date to back before Dogrel was even released. In a way, you can hear Fontaines D.C. transforming over the course of A Hero’s Death, with those earliest songs serving as a living document of a band growing in real-time. A Hero’s Death was an album written in transit, rooted in literal and spiritual movement, but it isn’t a travelogue. While we first came to know Fontaines D.C. as a band with a sharp eye for depicting a specific place, their second outing instead deals with complete lack of place — a band responding to the ground constantly shifting beneath them by concocting new destinations to chase. “That’s a thing in many ways on the whole album, to me anyway, the conflict of wanting love and praise and attention from anyone”, Chatten begins. “But also walking the line between having that affection and feeling totally trapped by it”.

If there is another manifesto, or perhaps an answer to the strife elsewhere on the album, it might come from the beginning, in the lyrics of “A Hero’s Death.” “Life ain’t always empty”, Chatten repeats again and again in a way that suggests he’s perhaps uttering the words sarcastically. The chords shift from major to minor, an unstable composition holding up a tenuous sentiment. “That’s what happens to mantras when you test them over and over”, Chatten explains. “To me, it is sincere in the end”.

It isn’t a mistake that the words death and rebirth mingle within the album. With words taken from a play by Brendan Behan, and album art featuring the statue of the mythological Irish warrior Cuchulainn that stands in Dublin as a commemoration of the Easter Rising, there are layers to the phrase “A hero’s death”. Fontaines know that they’re going to kill some people’s ideas of the band — several of them bristle at the notion that a second album would be full of “post-punk bangers”. They know they are killing a version of themselves. That’s part of the point. While not trying to push away the people who loved their music in the first place, the band is trying to push their listeners and themselves. There’s something poetic, but also ironic and self-deprecating about the title — Fontaines D.C. knowingly playing into the possibility that many people might be disappointed in something that isn’t Dogrel Part 2. A Hero’s Death isn’t that kind of quick follow up sophomore endeavour. It is, instead, sacrificing one identity in order to take on another, one that is fully their own.

“This is us as people. If people can’t accept it or don’t like it, then their band is gone.”

I do hope that people are shocked